It is a stone chisel for angle picking. It is used at the masonry work, architecture and gardening. Angle picking Chisel of this size (Diameter=13mm Carbide bits=3mm*3mm) becomes small size also in lineup. The main uses are carving for characters. It is used at the spot which likes a coarse result. Since those by whom it is purchased probably regard the usage as it being good and knowing, detailed description is omitted, but the following points should be careful.

Please adjust an angle in Aoto of the GC whetstone 120H according to the stone to be used before beginning to use. When using it for soft stones, such as the Shirakawa stone and an Oya stone , it is about 60 degrees. In the case of granite, it is common to adjust to an obtuse angle rather than 55 degrees.

If you are a professional, the optimal SETTO for Angle picking Chisel (Diameter=13mm Carbide bits=3mm*3mm) of this size is a 0.8 kg thing. However, when there is little experience, please use SETTO lighter than this.

It will be necessity about 7 business day to send. 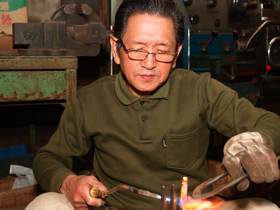 The notes on use about Stone Angle picking Chisel (D=13mm Bits=3mm*3mm, roll) [KONDO]

Please float Stone Angle picking Chisel (Diameter=13mm Carbide bits=3mm*3mm), whenever you strike. If it continues striking, contacting, it will become a cause of a crack of carbide.